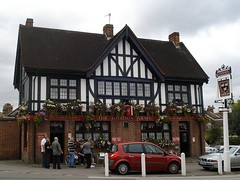 Inside is a single room, fairly small and dominated by the horseshoe-shaped bar. To the left of the bar is a dartboard, sensibly separated from the rest of the room by a small partition. There's a small beer garden/patio out the back, and a small carpark at the front.

Kake and bob visited on a Sunday Bank Holiday afternoon in August 2009. The place was pretty packed, though there were a couple of free tables since people tended to cluster around the bar itself rather than sitting down. Real ales available were Young's Special (£3.10 for two halves) and Courage Best. Our halves were served in stemmed glasses (bob claimed he could feel his masculinity leaking away by the moment).

Accessibility: A shallow step up to get in, but access from one side of the bar to the other is quite a squeeze. The toilet cubicles are a little narrow, but both gents' and ladies' have grab bars.