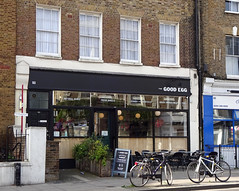 Cafe and restaurant in Stoke Newington.

It's not a large space, but feels open and airy, with white-painted walls and bare boards on the floor. A counter runs along one wall, divided up into a tiny bar next to the door, an area for counter seating in the middle, and the pass in front of the open kitchen at the back.

There's seating for 32 at small square tables flanked by bentwood chairs and an unusual wooden banquette that runs around two of the walls. Four more can be squeezed in on high stools at the counter, and another eight can sit at tables out the front, next to the car-filled Stoke Newington Church Street (a sign warns that smoking is not permitted out here).

The frontage advertises natural wines, fresh bagels, dinner and cocktails, and house smoked meat and fish. A board inside offers house-made shrubs (fruit and vinegar syrups, served in cocktails or diluted with soda water). According to their website, the menu is inspired by Israeli, Middle Eastern, and American Jewish food.

Kake visited on a Monday morning in July 2019. Arriving at their opening time of 9am, I was the first customer of the day, though a couple of the staff were just finishing their breakfasts at the end of the room, and there were people in and out for takeaway drinks. It filled up while I was there, and by 10am there were about a dozen of us. Music was playing, not too loud even though I was right next to the speaker.

Marinated feta hash (£10) photo was very good. The potatoes were nicely softened, but it was the toppings that really made the dish — well-sauteed onions and peppers, a flavoursome but not over-salty feta, a smooth harissa-based sauce, and two types of house-made pickle, both delicious. The fried egg (with a soft but not runny yolk) was almost superfluous.

A pot of Darjeeling tea (£3) was made with a bag, but a good-quality one with proper leaves inside. They were happy to refill it with boiling water for a second brew, and the tea leaves held up nicely.

Service was friendly and welcoming. Water glasses were already on the tables, and a carafe of tap water was brought without me having to ask. A 12.5% service charge was auto-added to the bill.

They have WiFi, which requires an email address and agreeing to various terms and conditions.

Kake's verdict: I liked it and would come back. There's certainly more of interest on the menu to try.

Child-friendliness: They can do children's portions on request. There were three children in during our visit.

Accessibility: Two large steps (without handrail) to get in. No further steps to the toilets (which are gender neutral).