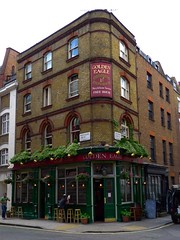 An old-fashioned single-room pub in Marylebone.

It likely hasn't been thoroughly refurbished for 30 or so years, but it's not run down. It's very clean (the gents' is especially good, even if the ceilings are rather low), and we wouldn't be surprised if they simply get a painter/decorator/handyman friend/relative/regular to give the place a lick of paint/do odd jobs from time to time.

When Rowley Birkin QC visited on a Friday evening in January 2008, the only apparent noise was customers chatting. I thought there was no piped music at all until a lull in the conversations when I heard some very faint music coming from the speaker (and I was standing right below it). Everyone else seemed to be a regular, probably local, all aged 30s to 60s. When bob visited on a Wednesday evening in April 2018, it was quite busy at 6pm. The clientele were a mix of ages.

The regular real ales are London Pride and St Austell Tribute (around £3.45/pint in April 2014). They also generally have a guest ale: well-kept Chiswick at £2.90/pint in January 2008, Brakspear Bitter in December 2008, and a very drinkable Black Sheep Monty Python's Flying Circus at £4.80/pint in April 2018. Keg options include Tetley's (smoothflow), Stella, Foster's, Strongbow, and Guinness.

As of April 2014 it was cash only, which may have been a factor in deterring the usual (noisier and younger) Marylebone crowds, though by April 2018 they'd started taking contactless.

According to an A-board seen outside in January 2008, there's a live pianist playing 8:30-ish to 11-ish Tuesday, Thursday and Friday nights.

Kat's verdict: I love this pub. I've never had a bad pint here, the guest beers rotate regularly, and the old school decor (including carpet!) keeps the atmosphere comfortingly untrendy. The live piano player is definitely worth experiencing at least once.