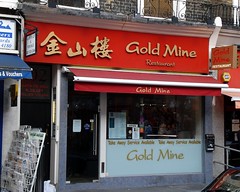 It specialises in roast meats, particularly Cantonese-style roast duck. In this, it's in some degree of competition with Four Seasons, down the road at number 84; according to a couple of the reviews linked below, Gold Mine was actually opened by the ex-barbecue chef from Four Seasons.

Inside, it's long and narrow, with a low ceiling, basic decor, crammed-in tables, and very little natural light. A mirrored wall in the back section helps to open up the space a little.

Kake, Leon, bob, and other Perlmongers visited on a Thursday lunchtime in December 2009. Arriving at 1pm, there was a short wait for a table even when we thought there were only four of us; however even when another four arrived, we weren't kept hanging around for too long as a large round table became free and they squeezed us in around it.

We shared a couple of orders of roast duck, a plate of crispy roast pork, a plate of seasonal vegetables, and rice/noodles. The roast duck was very good, moist without being overly fatty. Kake was pleased with the sauce, since it wasn't too sweet; Leon points out that the sauce at Four Seasons is sweeter, which some people may prefer. The pork was disappointing and inconsistent; some pieces had chewy skin rather than crispy crackling, and the meat was very dry and hard in places. Seasonal vegetables — large, nicely chewy mushrooms on a bed of greens (looked like gai lan) — were fine. The rice was also fine; not mushy or dried out at all, perfectly good.

Including tea all round (not sure if this was charged for) we paid £12/head.

Note: according to Chowhound, they also do a "grandma style" roast pork, which is stirfried in chillies and garlic and isn't on the menu.

Kake's verdict: This is not somewhere to linger over a meal, and I suspect the rest of the menu may not be worth bothering with, but I would happily eat more of that duck.

Accessibility: One step up to get in. Toilets are down a flight of stairs with at least one bend in it (not sure about handrails).