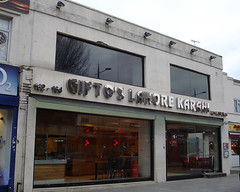 The large, low-ceilinged room has long communal tables stretched along from wall to wall. A few semi-circular banquette booths to one side offer a cosier option, and there's a small screened-off section at the back with more seating. An open kitchen runs along the wall opposite the booths.

Kake visited on a Thursday late lunchtime in December 2014. When I arrived a little before 2pm there were about a dozen other customers in, most of them just finishing lunch. Others continued to arrive while I was there, and I wasn't the only person on their own. No music was playing. The place felt a bit echoey, so might be loud at peak times.

I stuck to the chat pata (savoury snacks) section of the menu for a lightish lunch. Pani puri (£3.50 for 6) photo were fine; the puri were crisp, fresh, and structurally sound. I found they were a bit sweet overall, and would have preferred more tanginess/sourness, but this is just a personal preference.

Vegetable samosa chaat (£3.80) photo was also fine. The samosa pastry was robust without being too thick, and the peas in the filling were fresh and not overcooked. There was plenty of chilli heat here too. The cooling yoghurt sauce and tomato salad spread over the top were a welcome contrast, and the chickpeas scattered around were nicely cooked.

A jug of tap water arrived swiftly on request, and service was friendly and welcoming. No service charge was added to the bill.

Kake's verdict: I'd like to come back and try the hot food.

Accessibility: A large step to get in. No further steps to the toilets, including an accessible one (large cubicle, grab bars, etc).