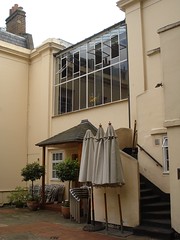 A vegetarian restaurant tucked away just behind the Hammersmith Apollo, in Hammersmith. They also have another branch in Islington, which opened in June 2012.

Note: The Gate closed for a lengthy refurbishment between spring 2012 and September 2013. We haven't visited since, so some of the below might be out of date.

The restaurant space is upstairs in an easy-to-miss white building, and entrance is via a staircase around the side. Once inside, it's a high-ceilinged, open rectangular area laid out with tables and subtly decorated.

On Ewan's December 2008 visit at 6pm before a gig, the place was empty initially but four or five groups had arrived within the first 15 minutes after opening. Service was prompt and the waiter asked if we needed to be out by a certain time (which we managed successfully).

Starters and desserts were priced around £6, with mains between £13-£15. Ewan's involtini (£6.25) were two lovely, flavoursome, layered and breadcrumb-encrusted small parcels of aubergine, tomatoes, red pepper and cheese accompanied by puy lentils. A friend's beetroot & Jerusalem artichoke salad (£5.75) was also praised, and certainly there was little disappointment.

For main, my aubergine schnitzel (£13.75) came with dressing of spicy horseradish sauce and some delicately crispy fried kale photo. If it was similar to the starter, then that was clearly down to my own poor selection, though it was certainly far from disappointing.

House wine was a modest £3 for a 175ml glass, and perfectly nice. They also have bottled beer.

Verdict: Ewan will insist on returning when next he is required to be in Hammersmith for any reason.