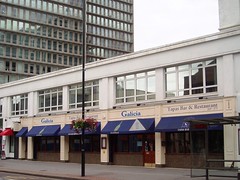 Spanish restaurant and tapas bar on the High Street in Croydon.

Kake and bob have visited a few times over the years. It's usually quite busy, but getting a table most nights shouldn't be a problem; on our last two evening visits (a Wednesday in November 2011 and a Thursday in December 2011) the place was fairly full but we were seated quickly.

They have a non-tapas menu as well, but we've only ever ordered tapas. In comparison to most of the tapas restaurants we've been to in central London, the prices are reasonable and the portions are relatively large. The quality is perhaps a little patchy, but there are some good dishes to be had here.

From the cold tapas selection, alcachofas con jamon (marinated artichokes with ham; £5.35 in Nov 2011) photo was good, with large well-flavoured artichoke hearts and extra umami provided by vinegared anchovies and sundried tomatoes. Pulpo a la vinegreta (octopus vinaigrette; £7 in Nov 2011) photo was also quite good; the octopus was nicely tender, and chopped fresh peppers gave a nice contrast in texture, though we could perhaps have done without the mushy asparagus spear draped over the top.

One of Kake's favourites among the hot tapas was fabada (cannellini beans with pork and black pudding; £5.30 in Nov 2011) photo; the beans had absorbed plenty of the flavour of the pork, and the black pudding had a lovely soft texture from braising in the sauce. Berenjenas con tomate (baked aubergines with tomato and cheese; £5.50 in Nov 2011) was disappointing though; the flavour was very bland, and neither the undercooked onion nor the large quantity of bell peppers did anything for the dish. Croquetas de pollo (chicken croquettes; £5.30 in Nov 2011) were disappointing too, with a stodgy texture rather than the creaminess found in good renditions.

Fans of Spanish liqueurs may wish to note that they have Licor 43.