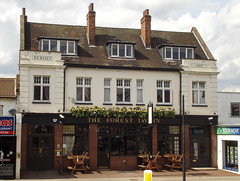 Formerly known as the Railway Tavern, Antic revamped this pub in September 2013. It's hard to miss if you turn left out of Forest Gate rail station, though crossing the busy road junction to get to it is slightly more taxing.

Note: In late 2020, a notice appeared on the Forest Tavern website stating that several pubs, including this one, had been taken out of the hands of Antic and transferred to the management of Portobello Brewing. In November 2021, Portobello announced that it had acquired the freehold. We haven't visited since the transfer, and so some or all of the details below might be out of date.

The decor is fairly standard Antic jumble-sale chic — one wall has a selection of golf clubs hanging on it, others have sheets of piano roll. There are plenty of tables and chairs in the front area, and a handful of stools at the bar. There is a large back room with extra seating. There are a few picnic tables outside at the front for smokers, though being on a very busy road, it's not the most peaceful spot to sit.

It seems that Antic are trying to make a decent stab at a community pub here: a sign outside advertises morning yoga classes during the week, as well as live music and regular DJs.

On Kat's Saturday afternoon visit in October 2013 the kitchen wasn't finished yet, but crisps were available behind the bar. There were four interesting ales on the handpumps: a pint of Harbour Amber Ale was £3.80 and well-kept. A pint of lime and soda (cordial, straw, no wedge) was free of charge but a few weeks earlier this had been a staggering £2.80 (perhaps because it was ordered on its own?). There was also a sign apologising for the state of the rather dismal (unisex) toilet, hopefully this will be resolved soon.

As of August 2014 they have started doing food photo of menu, though we've not tried it yet.