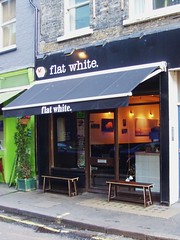 A coffee place adam really likes in Soho. It's run by Australian and NZ staff, which explains some of the coffee terminology which may be unfamiliar in this country. In the Antipodes, an 'Americano' is called a "long black" and an espresso a "short black", etc.

In any case, there are a number of tables inside (and a couple on the pavement for smokers), with some newspapers and magazines for reading. There's a small food selection (pastries and the like) as well, though the focus is of course on the coffee. The staff are clearly good at what they do (the coffee is excellent), and the service is very friendly.

They also have another branch nearby called Milk Bar, which opened mid-2008.