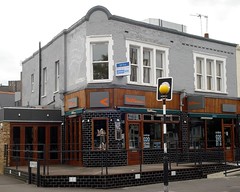 Fish and seafood restaurant in the Norbiton area of Kingston. It's connected to Jarvis fishmonger next door, and has another branch in Borough Market. Any fish available in the fishmonger can be cooked to order for you in the restaurant.

Entry is into a takeaway area, and there's seating further back. The general feel is of an upmarket fish and chip shop. It seats around 35 people inside, and more on the decking outside.

Kake and Shuri visited on a Wednesday lunchtime in March 2016. There were four or five other customers in when we arrived around 12:15pm. Music was playing, not too loud.

Pancetta-wrapped cod with spring onion mash and beurre blanc (£15) photo was pretty good. The cod was cooked competently — neither raw nor dry, with a nicely crispy skin — though there was very little actual pancetta. The mash was very smooth without being gluey, though the spring onions were rather inconsistently cut, with one slice so thick it ended up almost raw. Beurre blanc was properly emulsified and gave a good tangy contrast to the rich mash.

Service was fine, if a little too keen on attempting to upsell us with sides and drinks. Tap water was brought without us asking, but we did have to ask for a refill. No service charge was added to the bill.

Accessibility: A narrow ramp with sharp turns to get in. No steps to the toilet, which consists of a single large unisex cubicle.