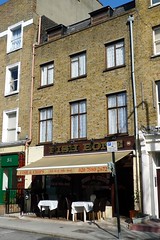 A fish restaurant and takeaway specialising in fish & chips in Fitzrovia.

It can be easy to miss on this parade of shops near the top of Cleveland Street, but Fish Bone does a good trade in excellent, well-made fish and chips (though it also offers other takeaway staples like pies, sausages, salads and chicken).

Walking in the door, there's a takeaway counter with freshly cooked fish and sausages lined up under heat lamps as you'd expect, and a board listing the takeaway prices above. Behind that are tables for eating in, a long banquette in the front half, as well as a small room out back with a skylight. There are also a couple of small tables on the street for nice weather.

Prices for eating in include a portion of chips, as well as tartare sauce and slice of lemon, as standard, and depend on the type of fish chosen (but hover around £9-£10.50). A larger portion of chips or extras such as garden or mushy peas attract an extra charge (peas are around £1.70). Fish can be fried in batter or matzo meal, or else grilled; the latter two options tend to take a little extra time.

Ewan visited with a friend on a Tuesday lunchtime and was able to get a table without too much trouble. The haddock cooked in matzo meal photo took around 10 minutes to prepare, but both were excellent quality. The batter was very thin but still fine and crispy. Peas on the side were well judged, and the mushy peas in particular had a good consistency and didn't taste in any way artificial. Chips were perfectly decent, crispy but not too much. Subsequent meals have been similar quality, and sometimes there are specials for small cod & chips and the like.

The takeaway prices are a bit cheaper, obviously (around £6-£7 for the fish, with chips an extra £1.50), and are served in a sturdy carboard box, with salt and vinegar provided on the counter for the customer to add.