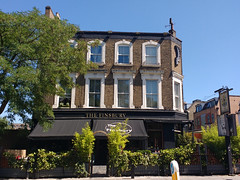 Pub on the edge of Finsbury Park, just along the road from Manor House Station. It seems to be aimed at the younger crowd, providing music or comedy every night of the week.

The building is split into three: the outside, the inside, and the back room. The outside might be generously called a beer garden, if one considers paving slabs with a view of the A105 to be a garden, but it does seat 30 or so people.

The inside consists of a large L-shaped space with tables throughout, as well as plenty of standing room. The bar, with open kitchen next to it, is in the corner of the L. Walls are exposed brickwork, and the floorboards underfoot are similarly bare. (Somewhat less fashionably, rough exposed plasterwork is also in evidence in places where the wooden window frames have crumbled away.) An open fireplace in one wall is no longer in use, but blackening at the back suggests authenticity.

The back room has a stage where music or comedy is performed. If you buy a "pizza deal", then the entertainment is often free.

When Steev visited on an early Monday evening (5pm) in August 2016, the outside was full but the inside was empty; it's likely though that the inside would have filled up later as a prelude to the music/comedy. When Kake visited on a Thursday lunchtime (around 12:30pm) in August 2018, there were just three other customers, all sitting outside. Latin American music was playing, not too loud. Service was friendly and welcoming.

On both our visits there was a wide drinks selection, but focused on lager; of the 12+ keg taps, eight were lagers (albeit trendy ones like Hop House 13 Lager) and one was Guinness. They had three ales on both times. In August 2016, these were Greene King IPA, another one from Greene King, and Black Sheep; the latter was not kept well. In August 2018, the ales were Greene King IPA, Old Golden Hen, and Ruddles Best; a pint of lime and soda was free!

According to the menu as of August 2018 photo, food is served noon-10:30pm every day. It primarily consists of pizza.

Accessibility: Step-free to get in via a ramp, but the approach to this is cobbled and uneven. No steps to toilets or back room.