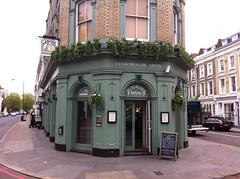 Pub in West Brompton. It was opened at the end of February 2014 by the ex-landlord of the Gunmakers in Clerkenwell, though he has now moved on. It has a theatre (the Finborough Theatre) upstairs.

It can seat about 20 on the ground floor, at tables with a combination of stools and pews. Music is played from vinyl on a record player, and there's also a piano. Further seating is provided in the basement, with a view (through glass) of the cellar photo.

bob has visited twice now, most recently in April 2014. On both occasions there were around five real ales and two ciders on handpull, as well as an interesting range of keg beers including at least one Italian craft beer.

On a Wednesday night it was fairly quiet except when there were people in waiting for a theatre performance upstairs.

Food is a range of pizzas from Firezza next door photo; order and pay at the bar. Plates and cutlery are available if you don't want to just eat it out of the box. In April 2014, bob's diablo pizza with no cheese photo was very good. As of November 2014, they also do various bar snacks such as scotch eggs, sausage rolls, and pork pies.

Accessibility: Not sure about steps to get in. There is an accessible toilet on the ground floor. Other toilets (and some of the seating) is in the basement.