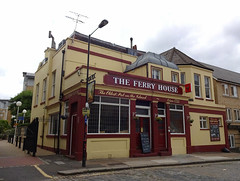 A traditional locals' pub on the southern tip of the Isle of Dogs, near Island Gardens Station.

It may not look much from outside, but this place is a perfectly friendly place for a simple beer. An early-2016 refurbishment smartened it up a bit, but thankfully without losing its character.

The main room feels light and open, despite being relatively small and half-filled with the bar. The floor is pale wood, contrasting with the varnished tables and dark brown bar. Windows are dimpled and leaded, but large enough to let in plenty of sunlight. There are two side rooms too, one cosier, and one lighter and brighter; the latter of these leads out to a decking area and patio beer garden.

In June 2017, two of the four handpumps were clipped, for Courage Best and Brockley Brewery Pale Ale. They also had keg taps for things including Orchard Pig Reveller and Camden Pale Ale. A pint of lime and soda was £1.

(There were previously a couple of dart boards, and possibly also a pool table upstairs, but these were removed in the early-2016 refurb.)

Dog-friendliness: According to a sign seen in June 2017, dogs are welcome.

Accessibility: Two large steps at the front door, and two slightly smaller steps at the side door. No steps to the toilets once you're in, and the cubicle doors open out, but there are some fairly stiff doors on the way there. A small step to the upper (decking) level of the beer garden, and more steps to the lower (patio) level.