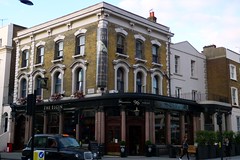 This is another successful conversion by Geronimo, and one of their better pubs, which even at 10pm on a weekday evening is still busy with punters. There's seating around the large bar area, with a mixture of higher and regular sized tables, as well as a couch area. Up some stairs to the rear is a dining area, and a side room offers more space for seating as well as putting on live music.

There are six handpulls for ale at the bar, dispensing Wandle and Adnam's. There are also draught lagers including Staropramen, Beck's Vier, Budvar and Meantime London Pale Ale, as well as Aspall's cider.

Food is served noon-3pm and 6:30pm-10pm Monday to Friday, as well as on Saturday and Sunday. The menu covers a good range of options, including fresh oysters. Bar snacks such as pork pies and scotch eggs (£2 each) are available at all times.

There's a beer garden area out the front of the pub with some shading from the street and large tables.