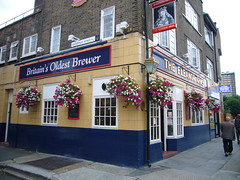 A very fine Shepherd Neame pub in the Old Ford part of Bow. Under new management since early 2008.

It offers Shepherd Neame beers as well as Oranjeboom lager. Music is from the landlords' own collections, and there is a beer garden (used by smokers).

LoopZilla has previously noted free seafood (and cheese & biscuits) on Sunday evenings, but an anonymous visitor (June 2009) suggests that this is no longer the case. Our anonymous friend also tells us that there are four real ale handpumps, offering "a selection of Sheps Beers and Specials from their Pilot Brewery", and that the Kent's Best is now £2.95/pint.

It comes complete with a BookCrossing Zone.

Comment added by PeterTonge: I write for London Drinker & gave the Eleanor a rave write up a year back. I've visited since and reckon Frankie & Lesley run a great little East End Boozer- the sort you see on a certain TV Show, without the aggro. It's like stepping back in time 40 years ago-and all the better for that