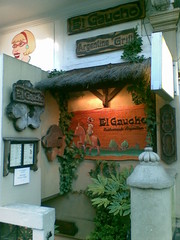 bob visited in June 2008 and had a very good Lomo A Cabllo (fillet steak with eggs) for £23.90 (it's £22.90 without eggs) including chips and salad. The steak was big and was cooked to perfection; the outside was crusty while the rest of it was perfectly rare yet still warmed through. They also provide you with a tasty chilli sauce, not too hot but with a little bit of a kick to it. Quilmes, an Argentine beer, was £3.

On a previous visit in 2006, bob tried the starters which were very good, although the fried cheese was odd. The empanadas and chorizo were pretty good though.

The restaurant is in a basement and can probably seat 30 in quite cramped conditions. It was quite warm.

There seems to be another branch in Chelsea.