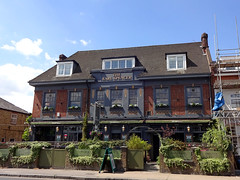 Inside is one large room with cream walls, dark blue paintwork, and mismatched unvarnished tables and upright chairs. There's some seating on the front patio area — picnic benches sheltered by umbrellas — and a bookable function room upstairs.

Kake visited on a Thursday early evening in August 2009. Three of the four handpumps were on, offering Sharp's Doom Bar (£1.70/half), London Pride, and Hook Norton Best Bitter. I had two halves of Doom Bar; the first was served in a Fosters glass and the second in a Becks Vier glass.

Food is served lunchtimes and evenings only, but they also have a bar snack menu available between noon and 6:30pm; choices included Scotch egg (£3), deep fried whitebait with pickled egg mayonnaise (£4.5), and Welsh rarebit (£4.50).

I decided to try the Scotch egg, after checking with the bar staff whether it was a bog-standard hardboiled one, or one of the runny yolk ones that the gastropubs are starting to do these days. It turned out to be roughly the sort of thing I was hoping for, though the yolk was soft-boiled rather than runny (and despite this they managed to slightly undercook the white), and although the sausagemeat was coarsely-ground (a good thing) and far from the usual grey mush, this was somewhat counterbalanced by the couple of pieces of gristle and small piece of bone I found in it. This came with some decent enough mustard and a few lightly dressed (and very likely from a bag) salad leaves. Summary: a commendable effort, not quite perfection.

Service was fine. There was no music playing (the 2009 Good Beer Guide states that this is a deliberate policy). It didn't really feel like a gastropub when I arrived around 5:30pm, partly because of the clientele and partly because to me the decor looks more like a tatty locals' pub than a shabby-chic gastropub; in fact I'd assumed it was the former until I looked it up on my phone and saw it listed as a gastropub.

Accessibility: There's a ramp at the front which might provide step-free access, but I didn't notice it until I was leaving. The entrance I used had two steps. It's level to the bar, seating area, and toilets once you're in.