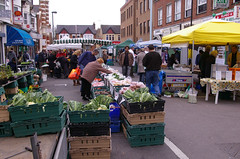 A weekly farmers' market on Leeland Road in West Ealing. It's held every Saturday morning from 9am until 1pm.

It's not huge, with maybe a dozen stalls if that. As of Kake's December 2008 visit, there were two bread stalls, a vegetable stall, a pie stall, three meat stalls, a flower stall, and a couple of others I didn't look at closely. One of the meat stalls had a grill attached and was selling freshly-cooked bacon and sausages. I got some lamb chops from one of the other meat stalls, Food Fore Thought, which sells various cuts of pork and lamb. I've also previously tried one of the pies from the pie stall (a chorizo and something one) but was underwhelmed.