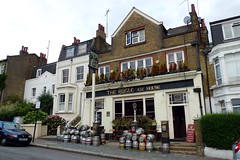 Inside this pub are several different spaces, with partitions between them, and the bar stretching around the corner. Furniture is solid and wooden, and the overall feel is of an old-fashioned pub space, well treated by the owners. A TV is located near the door and on an August 2010 visit is on, but with no sound (though there is music playing quietly). There is a large beer garden out the back, mostly covered, with several couches grouped in a circle in the middle, and a range of tables.

The primary focus of this old-fashioned pub is clearly the ale. The bar has eight handpulls, five of which were on when Ewan visited in August 2010. Ales included Sharp's Doom Bar, as well as four rather less well-known ones, in good condition (£3/pint). Other drinks seem fairly standard.