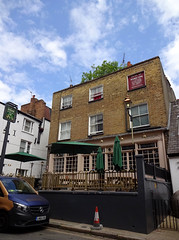 Pub in Hampstead. It closed in mid-2017, reopened under the name of the Hampstead Jazz Club later the same year, and then changed hands again and reverted to its original name (see old version of this page for a pre-2017 assessment). In its latest incarnation it remains home to the Hampstead Jazz Club, which is located in the basement.

The pub is quite bare-bones inside, with wooden floor and tables, plain-painted walls hung with black-and-white photos of jazz legends, and bullseye glass in the windows. The bar front is a mix of tiling and wood panelling, with a wood-and-glass gantry above. Seating is primarily on small wooden chairs, though there's also a narrow upholstered banquette at the back. A patio out the front offers extra seating space.

Kake visited on a Monday afternoon in June 2019. There were a couple of people sitting on the patio when I arrived a little after 1pm, and a couple more inside. Music was playing, not too loud (and not jazz).

Only one of the three handpumps was clipped, for London Pride. They also had several keg beer taps, mainly badged for Camden beers plus one each from Kernel and Five Points. A pint of lime and soda was £1.50.

They allegedly have WiFi, with the network name and password given on the snacks/drinks menu, but I couldn't get it to work.

Accessibility: Several steps without handrail to get to the patio, and a couple more, again without handrail, to get into the pub. Toilets are up a flight of stairs with a bend in the middle and a handrail on one side.