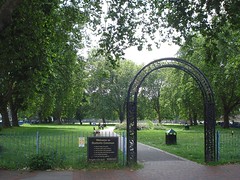 Small green space just at the top of Green Lanes in Harringay (could also be considered part of the south bit of Wood Green).

It's mainly a trees-and-grass-and-paths open space, though as of June 2013 a new wildflower border has also been planted. There's also a children's play area and many other recreational facilities including football and basketball courts, an outdoor gym, and a table tennis table.

A sign at the north entrance asks visitors to refrain from feeding the pigeons, while another warns that the park is in a drinking control area.