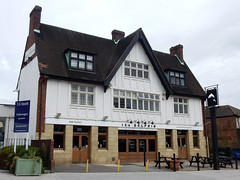 Gastropub in Sydenham. It reopened in December 2006 after substantial refurbishment.

The decor is fairly minimal gastropub-style; stripped wood, etc. Unfortunately many of the tables are not very sensibly matched heightwise with the chairs — unless you have very slim thighs you might find your circulation getting cut off after a while. The beer garden is specially designed and certainly worth a look. There's also interesting tiling in the loos, both gents' photo and ladies' photo.

There are four handpumps on the bar. When Kake and bob visited on a Wednesday afternoon/evening in February 2008, two of them were on, offering London Pride (£2.95/pint) and Timothy Taylor Landlord; a cup of English Breakfast tea was £1.70. In November 2014, Kat's pint of Tribute was well-kept. In May 2016, the ales were West Berkshire Good Old Boy, Caledonian Edinburgh Castle, Purity Mad Goose, and Adnams Southwold Bitter; a pint of lime and soda was £1.80.

On our February 2008 visit, it was fairly quiet during a midweek afternoon, but filled up in the evening. Music was playing, mostly from the mid-90s (Red Hot Chili Peppers, The Cure, Pink Floyd, etc.), not too loud for conversation. By November 2014, the music seemed to have been updated a few years, and moved on to mid-2000s emo rock (Good Charlotte, My Chemical Romance, etc.).

In February 2008, Kake's onion rings (£2) were rather good, arriving hot, obviously freshly made, and comprising whole rings of red onion in a crispy batter. A shared starter platter of hummous, tapenade, and baba ganoush photo was also really quite good, particularly the flatbread. For mains, bob's cassoulet and Kake's ribeye steak were both fine, and there were some particularly good button mushrooms with the steak. Service was very friendly, and generally quite competent, though there were minor niggles — no napkins or cutlery brought with the onion rings, and vinegar for chips was served in an entirely unsuitable milk jug. Glass-clearing was also slightly slow.

They have free WiFi, which as of May 2016 is accessed by filling in a form with name, email address, etc, but doesn't seem to require any of this information to be actually true.

There is also a selection of newspapers available to borrow.

It's possible to reserve tables, at least in the evening.

Kat's verdict: I liked the general vibe of the place but I don't think my parents were convinced.