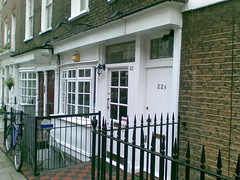 Very small Japanese restaurant in Marylebone. Six seats at the sushi bar on the ground floor, and seating for maybe 20 downstairs in the basement dining room.

The menu is divided into sushi/sashimi, cold tapas, and hot tapas. This is perhaps rather a stretch of the meaning of "tapas", but it basically means that your meal is made up of several small dishes, which won't all arrive at once, and won't necessarily arrive in any particular order.

Kake and Bob visited on a Tuesday evening in June 2008. We hadn't booked, but there were two seats available at the sushi bar, so we were seated there (there would have been a small wait for a table downstairs, but Kake prefers the sushi bar anyway).

Yellowtail sashimi with yuzu, garlic, and green chilli salsa (£8.85) was excellent; just the right amount of garlic and chilli to complement but not overwhelm the fish. Chilli garlic shrimps (£6.75) were also very good; flavourful and with a hint of char on the outside without being overcooked on the inside.

On the other hand, otoro sashimi (£7.30 for two pieces, though we got three) was disappointing; although the required fatty marbling was present, the cut was spoiled by the vein of chewy connective tissue running through it. Iberian pork with Korean miso (£7.65) was rather too unsubtle for Kake's taste, though I should perhaps have expected that.

In all, we ended up spending £75 between us on food, and £50 on sake. This is not cheap, but it's not utterly ridiculous given the quality of what we had. The auto-added service charge was 10%, which is nice to see given that so many places seem to have moved up to 12.5%.

Kake visited again a month later, this time in the company of doop. The food was again good, and the otoro was fine this time. I think the bill was around £100 this time, about £30 of which was sake.

Kake's verdict: I really like it here and will happily return.