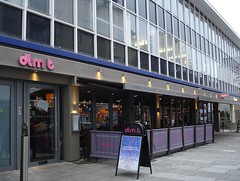 Dim sum and noodle restaurant in Victoria, part of a small chain. As the "chain" part implies, it's one of the more modern-style dim sum places, with smart decor and funky music.

Kake and bob visited on a Sunday lunchtime in December 2008. There were a few family groups in already, but we had no problem getting a table. We were offered a choice of where to sit, and we chose the sunken sofa/booth area towards the back.

The menu is written almost entirely in English, and so you're left to guess exactly what kind of "steamed dumpling" will turn up when you order "spicy beef" or "chicken with Asian greens". Most of the dim sum are steamed (all priced at £2.90 for three pieces, or two pieces in the case of "roasted pork buns"), with the only fried options being spring rolls (duck at £4.25 or vegetable at £3.85), gyoza (vegetable or chicken, both £4.10), and sesame prawn toast (£4.10) (prices as of December 2008).

Between the two of us, we had chicken gyoza, vegetable spring rolls, spicy beef dumplings, prawn and chive dumplings, scallop dumplings, minced pork and prawn dumplings, and roasted pork buns; bob also had a portion of stir-fried egg noodles on the side (£2.40). Pleasingly, there was a choice of tea; Kake had white tea (organic peony, £2.95/pot) and bob had jasmine tea (£2.10/pot). The tea came in some nice-looking heavy black teapots that were larger than they looked, and was just fine.

The fried items - the gyoza and spring rolls - were both quite greasy, and for some reason arrived warm rather than hot, though the flavour and texture were fine. The steamed items were better; good flavour in the scallop dumplings, and a nice level of spiciness in the spicy beef dumplings (particularly in the one that Kake got, with a slice of red chilli on top). The minced pork and prawn ones, like the spicy beef ones, turned out to be siu mai; these were perhaps a little less successful, with a preponderance of pork over prawn that led Kake to declare them as being basically steamed sausage.

Service was fine. In total, we ended up paying £15/head excluding service (which we added separately as it wasn't included on the bill), and bob was still a little hungry afterwards - this is half as much again as we'd expect to pay in a more traditional place, but that's par for the course in these chain places.

Kake's verdict: It was rather better than I was expecting, and there's nowhere else to get dim sum in the area, so I've already suggested to Leon that we should come back some time with the Perlmongers. Not sure the menu is interesting enough to bear a third visit, though.