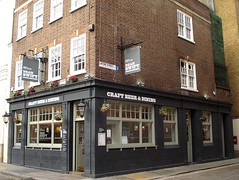 Pub near Tower Bridge, which as of 2010 has rebranded itself under the tagline "Local Beer House".

It's relatively small, though there were a few spare tables when bob visited on a Friday lunchtime in November 2010. Ewan has also visited twice on Saturdays just after the pub's opened and there have been plenty of tables available.

On a November 2010 visit, a pint of Kernel Brewery Pale Ale (£3.50) was very drinkable; this ale isn't normally available in cask at other pubs. The other ales were Sambrook's Wandle, Sambrook's Junction, and Purity Mad Goose. A pint of lemonade and lime was £3. On visits in January and March 2011, there has been a Redemption ale on, and Dark Star Espresso has also been spotted, amongst others. They also have an extensive bottled beer menu, including a number of Kernel beers (which can be paired with cheeses from Neal's Yard).

As of March 2011, food is served noon-9pm daily. In November 2010, bob had the 1666 burger (£13.50) photo, a very good (and large) burger which came with blue cheese, bacon, a perfectly fried egg, chilli and a pickled scotch bonnet. It was very hot, even for me, and I struggled to finish it due to the heat and size. The chips were good, although were pre-salted.

Ewan has found that the pub tries to insist on table service, which hasn't always been pulled off successfully (we've experienced a few waits), though the staff are all exceedingly polite and friendly, and there's a pleasant atmosphere.

On a Sunday evening visit in March 2010, there was a quiz about to start (we left before it did). Not sure if this is a regular occurrence.

Accessibility: A step up to get in. It's quite small inside. Not sure about access to toilets.