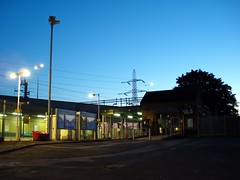 It's in the middle of an industrial area, and according to Wikipedia it's one of the quietest stations on the c2c network. There were plans to extend the DLR here, via Gallions Reach, but as of 2008 these plans have been shelved in favour of an enhanced busway system through the area.