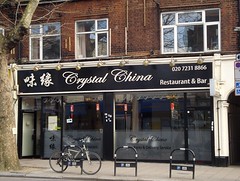 Chinese restaurant on Tower Bridge Road in Bermondsey. It's located in the premises previously occupied by Super Nova and before that by Sanh Hing.

As well as the usual anglicised Cantonese stuff, the menu includes regional Chinese food from Sichuan, Dongbei (North-East China), and Shanghai. They also do takeaway and delivery, with online ordering via Just-Eat (though the Just-Eat menu only has a very small selection of the proper Chinese food).

bob has visited several times now, most recently in January 2013.

Sichuan double-cooked pork (四川回鍋肉; £7.50 in Dec 2011, most recently ordered in Jan 2013) photo has been quite good every time I've ordered it; suitably porky and chillified, with plenty of peppers and carrots too. The first time I tried it, the plate was decorated with a bird carved out of carrot, though this has been absent recently.

Dan dan noodles (擔擔麵; £5.50 in Dec 2011, most recently ordered in Jan 2013) photo in Nov 2012, photo in Jan 2013 was a bit lacking in chilli oil the first time I ordered it, so the noodles stuck together a bit even after I mixed it all up, though this lack has been remedied on more recent orders. The pork was quite coarsely minced. When I ordered this, the waitress warned me that it was very spicy, but to my palate it was just averagely hot.

Fish in hot chilli oil (味緣水煮魚; £13.80 in Dec 2011) had somewhat overcooked fish, and the dish could have done with more chilli oil. There were also an awful lot of beansprouts in the dish.

Special cooked aubergine photo in Nov 2012 used the same sort of batter as crispy shredded beef, and was very good. (This possibly came from the Dongbei section of the menu.)

Pork dumplings photo in Jan 2013 could have done with a bit more grilling; the crust on the bottom was a little anaemic. The wrappers were thick and chewy (as is standard for this type of dumpling).

In December 2011, some of our party tried out the less interesting section of the menu too, including the £5 lunch deal which gets you one dish plus rice. A couple had soups from this section too, and reported that neither the chicken and sweetcorn soup (£3.20) nor the mixed vegetable soup (£2.80) tasted of much, though the portions were large. Tea was £1.50/person; quite a decent jasmine tea, and the teapot was topped up frequently.

The food was a bit slow to arrive, even though they weren't busy — we seemed to be the first customers of the day. They asked us to order by number instead of by the name of the dish, which led to one dish being mis-ordered; they did give us a 10% discount on the entire bill because of this, though.