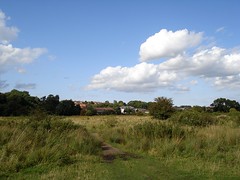 A nature reserve and Site of Special Scientific Interest just to the south of Croxley Green in Hertfordshire. The Grand Union Canal and the River Gade run along its northwest side, and the common itself is criss-crossed with footpaths, though none of them are surfaced.

Access is via Mill Lane, which leads down from Croxley Station to the northwest, or via the Ebury Way Cycle Path or Moor Lane Crossing to the south. A sign at the south entrance warns that model aircraft may only be flown over the moor at certain times.

Although there is a local group known as the Friends of Croxley Common Moor, who do some conservation work, they don't seem to have a website.