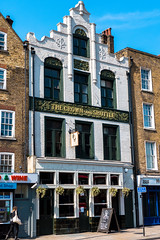 A trendy craft beer pub at the south end of Shoreditch High Street, opened in April 2013. Its previous incarnation was a rather grotty strip club: apparently one of the poles remains, but dancing around it not mandatory. The clientele is a mix of office workers and fashionable youngsters, as you'd expect for the area.

The pub is partitioned into two main rooms, with the bar stretching between them along one side. The bare floorboards and sparse decor makes it rather noisy in these sections. There's an enormous beer garden to the rear, which is almost entirely covered over with corrugated plastic (just leaving enough of a gap for it to be classed as a smoking area). Combined with the large number of space heaters, this means it's perfectly comfortable to sit outside in the chilly British Autumn. The kitchen is also outside, in what looks like an old fashioned steel burger van, the kind you'd see at festivals.

The range of beer is extensive: on Kat's visit in November 2013, 6 handpulls were marked on a blackboard above the bar, including Truman's Swift and Redemption's Urban Dusk. These were well kept but all cost an eye-watering £4.40/pint, regardless of rarity or ABV. There were some interesting beers on tap too, including local brews Redchurch Stokey Brown, London Fields Harvest (a whopping £6/pint!) and several Meantime Brewery beers. We also spotted an unusual bottle of Swiss beer in the fridge.

Accessibility: the doorways are rather narrow and awkward. There are several steps for the different levels in the beer garden.

Kat's verdict: the beer selection is good enough that I'd be happy to return for a quick pint or a bottle from the fridge, but I doubt my wallet could take a longer session.