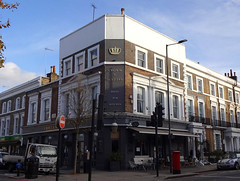 Pub in Kensington, also providing hotel facilities with five "en suite boutique bedrooms". It was in the Good Beer Guide before closing in 2009 due to the owners' retirement (see older version of this page for a pre-closure description), though it later reopened under new management.

It's a small space, made to seem smaller by the large square pillars lined up in front of the bar. The ceiling is high and the windows large, but the latter are part-covered with blinds, nudging the atmosphere closer to cosy than light-and-spacious. Bare boards are underfoot, paintwork is in shades of grey, and seats are upholstered in red and blue. Seating is provided by tall tables in the centre of the space, stools at the bar, and banquettes on a dais.

A large brass chandelier-style light fitting dominates the ceiling, with additional lighting coming from directed spotlights and some quite attractive art deco style lamps above the bar. Stylised "broken-off pillar" flowerpots hold various bits of greenery, and tulips sit in small milk bottles on the tables — though unfortunately on our visit many of these had already lost all their petals.

Kake visited on a Tuesday afternoon in November 2018. There were three or four other customers inside and two more outside when I arrived a little after 2pm. Ultra-'80s music (Ghostbusters, Total Eclipse of the Heart) was playing, almost but not quite too loud, and somewhat incongruously upbeat for a mostly-empty pub on a weekday afternoon.

The handpumps were clipped for two real ales: Marston's 61 Deep and Fuller's London Pride. They initially asked me for £3 for a pint of lime and soda (from the gun, not bottles), but reduced this to £2 when I objected.

Food is served from a small open kitchen squeezed into the far corner; according to a sign seen in November 2018, this is available 7:30am-10:30am, noon-3pm, and 6pm-9:30pm Mon-Sat; and 8:30am-10:30am and noon-8pm Sun. Croissants and prepackaged muffins sit on the bar for those just wanting a snack.

Accessibility: A ramp to get in at the front entrance (there may be a small step at the side entrance). There is limited normal-height seating on the level — most of the seating is either at high tables, or on a dais up one or two large steps. The toilets are in the basement, down a flight of stairs with a bend and a handrail on one side part but not all of the way down.