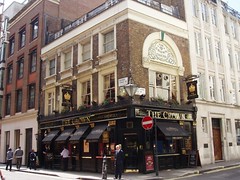 There's a dining room with table service on the first floor. On the ground floor, there's a bar area at the front with stools set around the windows and a few tables, and a back area with six tables and banquette seating.

bob and family visited on a Monday evening in September 2009. When we arrived at 6:20pm it was relatively busy, but by 7:30pm it was completely empty. Music was playing, slightly louder than was really comfortable for conversation; we had to raise our voices a bit to be heard.

Food is served lunchtimes and evenings (and breakfast from 10am), according to the 2010 Good Beer Guide. The menu looks like a standard Nicholson's one, with most mains priced around £6-7. bob had the large (two-patty) burger (£10.50 including chips) and paid an extra £1 to have bacon and cheese on it as well. The chips were fine. The burgers were made from pretty tasty meat, and were competently cooked (I'd have preferred them slightly rarer, but that's a personal preference). I think they were actually chargrilled. Fergus seemed happy with his scampi (about £6). Dad had one of the specials, cottage pie (also about £6).

We also tried some of their bar snacks — pork scratchings, served from a huge kilner jar at £1.80/bowl. These were pretty good, better than average.

Accessibility: Toilets are up a flight of stairs. Can't remember if there was a step to get in.