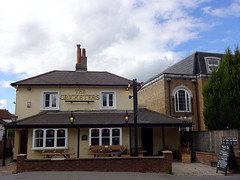 Until mid-2017 it was a fairly traditional pub (see old version of this page for more details), but that incarnation closed down in June 2017. It reopened in September 2017 in the hands of Miss P's, a company specialising in barbecue-smoked meats which had previously traded mainly as caterers and pop-up street food providers. Its name was changed to Miss P's for a brief time after this reopening photo, and the barbecue-smoked meats were made available on the pub menu photo, but according to the Miss P's website as of early 2018, they found that it wasn't viable to keep this going, and so the menu was simplified and the name reverted to the Cricketers.

It still feels like a pub, with a low ceiling and a prominent central bar, and it's fine to come in just for a drink. Lighting is generally dim, with targeted spotlighting above the tables so you can see what you're eating.

Wooden planks cover most of the walls, with a small amount of exposed brickwork left for interest. Bar and floor are also wood, as are the two large square window seats and tables in the bay windows at the front. Other seating is provided by long backless benches at long communal tables. Much of the wood used here is recycled, sourced through the South London Wood Recycling Project

There was no real ale (the bar has no handpumps), just keg taps for Meantime beers (Yakima Red at £5/pint, London Lager, London Helles, and London Pale Ale), Guinness Extra Cold, and Hazy Hog cider. A pint of lime and soda was £1 in October 2017 and 50p in June 2018.

At that time the food options focused on burgers and chicken wings with a couple of fish and vegetarian options photo of menu. Kake had the Cajun catfish sandwich (£6 including sides of pickles and slaw) on both visits, since it was so good the first time photo in Oct 2017, photo in Jun 2018. Both times the fish was seared on the outside without being at all overcooked in the middle, the Cajun mayo included in the sandwich worked well with the fish, and the brioche bun was soft yet still sufficiently structurally stable. They actually even improved it in the time between my visits, putting shredded lettuce in the sandwich instead of slaw; my only previous complaint had been that having slaw in both the sandwich and on the side felt a bit samey. The slaw itself was great, with fresh, competently-shredded vegetables in a vibrant vinegar dressing. Cajun fries (£3 in Oct 2017) photo weren't spicy-hot at all, but had a good flavour and were nicely crisp.

As of late 2021 the food is provided by Mikos Gyros, and unsurprisingly consists of gyros (with vegan and vegetarian options) served either as hotboxes or wrapped in pita. Takeaway and delivery are available.

In November 2021, Kake accidentally managed to order their pork gyros pita (£7.45 via Deliveroo) photo with no sauce, which made it drier than ideal. The pork itself wasn't at all dry, though; cooked just right and with a nice balance of fat to meat. The bread was fine, with a nice chew to it but still soft and yielding. There was very little salad — just a few scraps of onion and tomato — which made it a bit monotonous after a while, especially given the large amount of chips included in the wrap, and overall it was a bit saltier than I really wanted it to be. However, the pork was good enough that I'd order it again (with sauce this time, and I'd also ask for extra salad).

bob's vegan gyros hotbox with extra mushrooms (£12.40 via Deliveroo) photo included oregano chips, pita, and salad as well as the mock-meat gyros. The mushrooms were good, and the chips were crunchy and had a good flavour. The vegan "meat" was a bit unconvincing, though; it might have worked better in a wrap.

We also shared a small snack pack (their name for loaded chips) with chicken, sriracha, and vegan gyros sauce (£7.45 via Deliveroo) photo. Kake, who ate some of the top layer, found it again rather salty, but good overall, with varied textures and a nice zing from the sriracha. The sriracha was heavier on the chilli heat and lighter on the vinegar than your standard sriracha, and the chicken was much less boring than chicken often is. However, bob, who ate the rest of it noted that because all the sauce was all on the top, the lower layers of chips were a bit boring in comparison.

Accessibility: A step to get in, and more steps to the toilets. Seating is mainly long backless benches at long tables.