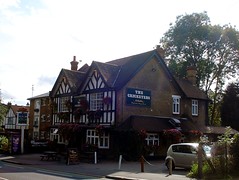 McMullen pub in South Woodford. It has two separate bars, a public bar and a lounge bar. The public bar is nice enough, with dark wood decor, matched wooden tables and chairs, and a burgundy banquette underneath the bay window. There are montages of photos of the regulars on the wall, and a dart board.

Kake visited on a Thursday afternoon in September 2008, and sat in the public bar. There were half a dozen regulars already in when I got there, and the radio was playing, though not too loudly. Three McMullens beers were available on handpump; I had AK at £1.19/half. Service was friendly and the regulars weren't unwelcoming.