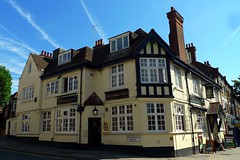 A large chain pub near Highams Park Station, on the edge of Hale End.

Occupying a site just around the corner from the station and opposite an elegant former cinema (closed as of mid-2012), this large solid-looking pub is split into several rooms, with plenty of wood fittings and some low timber beams suggestive of a much older establishment (the building only dates to the early-20th century). There's a carpeted area to the rear on one side of the bar, and a space with two pool tables and a darts board on the other, with a large area in front of the bar by the entrance offering a range of seating options. Windows are large but don't seem to let in a huge amount of natural light; this place still feels cosy.

There are two handpulls for ale, dispensing London Pride and Hobgoblin on Ewan's September 2012 visit, though he didn't try either. Draught keg taps dispense the usual lagers, including San Miguel and Beck's Vier (£1.58/half).

Sport plays on the TV, though the volume is down low on a Saturday near opening time. Service is friendly.