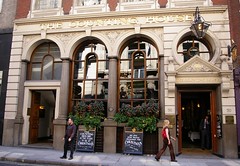 Large Fuller's Ale & Pie House in the City near Bank Station. The building is a converted bank, which was originally built in 1893 and purchased by Fuller's in 1997.

Has a number of function rooms, including one big enough for 110 people, according to signs. Very busy in the early evening, but clears out later on, as all the City types go home. There's a dining room at the back of the ground floor which they open occasionally, and a dedicated dining area upstairs, with table service from noon-3pm. On a Friday lunchtime, the place also gets quite full, though there's plenty of space to perch even so.

Food is served noon-9pm Monday to Friday. The menu consists of their pies (the pub is a Fuller's Pie and Ale house), augmented in the evening by a few other pub staples. It was reasonably tasty and not too expensive. Bangers & mash photo was £9, and the sausages were particularly tasty. Ewan's mushroom & stilton pie (£8.50) photo was delicious and filled with cheese, with a puff pastry topping, fresh steamed vegetables and new potatoes (though you can choose whether you have these, mashed potato or chips).

The standard range of Fuller's ales were reasonably kept, with Discovery, ESB, Chiswick and Pride on the pump. As of May 2008, London Pride was £3.20.