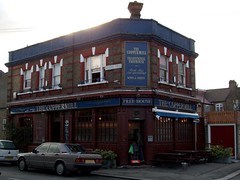 This is very much a friendly local pub, with carpet on the floor, plenty of antique curios and knick-knacks decorating the place, and a line of five or six locals sitting on stools along the bar on a Tuesday afternoon. There are six or seven tables, with banquettes along the walls and some booths. A TV screen is mounted at one end of the pub (above the loos) — when Ewan visited in September 2011 this was showing sport with the sound off; instead, music was playing, fairly quietly.

There are four handpulls for ale at the bar, with Greene King IPA, London Pride and Pedigree apparently all regulars. On Ewan's September 2011 visit, the guest ale was Caledonian Flying Scotsman (£3.05/pint), in decent condition. There's a few draught taps as well, with Heineken, Guinness and other cooking lagers.

According to the 2012 Good Beer Guide as well as signs in the pub, there is a quiz night on Sunday at 8pm, with free entry and a £50 prize.

There's a dart board located just in front of the loos, though on Ewan's visit it didn't show much sign of being in use, and its cover was closed.

Accessibility: Two steps into the pub from both entrances, but once inside, no steps to the loos.