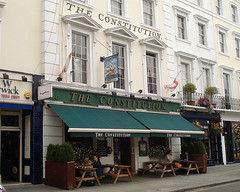 It's a proper old-fashioned pub, with traditional decor. The single-room ground floor has a faded patterned carpet underfoot, and upholstered banquettes along a couple of the walls. Round-topped bar stools cluster around a couple of high tables in the centre of the room, but the rest of the furniture is normal height. Tables are varnished wood on wrought iron bases. An old CRT TV is mounted above the door, and a flatscreen is high in one corner above the bar. China dogs, Toby jugs, ceramic plates, and other paraphernalia are displayed on a high shelf running around the room just below the ceiling.

There's more seating upstairs, in the "Churton Room" photo, and there are a few picnic benches outside on the pavement.

Kake visited on a Wednesday lunchtime in September 2014. There were a good two dozen people in at 1:15pm, a few of them sitting outside, some of them having lunch. Most of them were in groups of three or four, and there was a pleasant buzz of conversation. Music was playing (Heart Radio), not too loud. Both TVs were switched off.

The handpumps offered Greene King IPA, St Austell Proper Job, Sharp's Doom Bar, Spitfire, and Thatchers traditional Somerset cider (the last of these with a home-made pump clip). They also had a cider festival on, with the ciders on stillage at the back of the room. A pint of lime and soda was £1.40.

According to the 2015 Good Beer Guide, food is served every day except Saturdays (roasts on Sundays). Menus on boards in September 2014 suggested that this is traditional pub food such as half roast chicken; ham, egg, and chips; scampi and chips; chilli con carne; and macaroni cheese. A sign indicated that Sunday lunch is noon-4pm.

Accessibility: A step to get in. The ladies' is up a flight of stairs with a sturdy handrail. Gents' not checked, but might be on the ground floor.