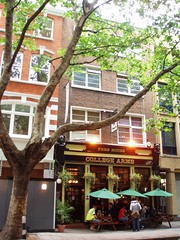 Studenty pub in Bloomsbury, just off Tottenham Court Road and located opposite the Building Centre. It's part of the Faucet Inn group. There's some seating outside, at picnic benches.

Kake visited on a Wednesday afternoon in May 2009. The place was pretty empty, since it was the middle of the afternoon, but the barman told me it's usually packed at lunchtimes and after work, though on a Friday visit in August 2009 (during student holidays), it wasn't too bad, though pop music was playing at not inconsiderable volume and a TV screen was showing music videos at the rear of the pub.

There are several large long tables up the front opposite the bar, with more towards the back, and a area with couches up a few steps to the rear.

There are four handpumps on the bar, but only two beers were on offer on Kake's May 2009 visit: Adnam's Bitter (£1.55/half) and Bateman's XB (not XXXB). On an August 2009 visit, the ales were again Bateman's XB, Adnam's Broadside on two pumps, and Thwaites Bomber advertised as coming soon. Draught lagers included Grolsch and Grolsch Blond, San Miguel, as well as Aspall's cider. Not a great range of wine, but house red wine was just about drinkable (at £3.30 for a small 175ml glass) and didn't get much better at the upper end of the range (£4 for a small glass).

A sign seen outside in May 2009 advertised food between noon and 10pm every day.

Accessibility: One step up to get in, but there's a doorbell with a wheelchair sign by it, and a sign saying to ask staff for help. Toilets not checked.