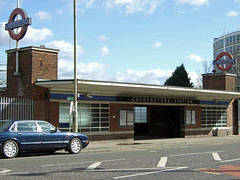 Zone 5 Tube station, eastern/northern terminus of the Piccadilly Line. (The Piccadilly Line is officially a west-east line; this leads to the odd situation where Cockfosters is eastbound from Oakwood but geographically almost due west.)

As of January 2008, the station has both men's and women's toilets, but you have to pay 20p to get in (this goes to a local charity).