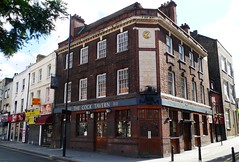 A brewpub offering a large range of real ales and ciders, near Hackney Central Station, which opened in July 2012. The brewery in the basement puts out beers under the name Howling Hops. The pub is owned by the same person behind The Southampton Arms, and has a similar remit in focusing on independent British breweries.

This former locals' pub has a certain heavy-set exterior charm with its old Truman's signage. Unlike many conversions, there's still a fair amount of old-fashioned if slightly oppressive atmosphere to the interior as well, though it's been stripped back to bare wood floors. Tables surround the central bar along the two street-facing walls.

The main draw of the bar is the 16 handpulls, offering an even split of ales and ciders/perries on Ewan's visit. In August 2012, these were dispensing the two Howling Hops beers brewed in the pub's basement (an IPA and a golden ale, £1.50/half), as well as ales from Redemption (Urban Dusk), Thornbridge (Kipling), Magic Rock (Dark Arts and High Wire) and Redwillow (Feckless). The ciders and perries included Gwatkin, Oliver's, Burrow Hill and others. Eight draught keg taps had Harbour, Camden Town, Magic Rock and others.

On Ewan's Sunday afternoon visit during the Olympics, it was fairly quiet, maybe five or so tables were taken, with music very quietly playing in the background. There are no television screens.

There was no sign of a food menu, though bar snacks including pies are apparently available.

Accessibility: A step to get in, though toilets are on the same level.