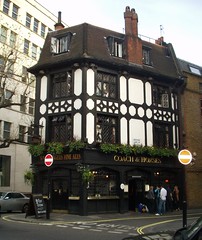 Rather small pub near Berkeley Square in Mayfair.

Seating for maybe 15-20 people inside, with some standing room too. You can also take your drink out to the small amount of pavement outside. There's a dining room upstairs (available for private functions) but it's only open at lunchtimes (noon-3pm). The ladies' loo is a single cubicle (adequately clean), up one flight of stairs with a bend in the middle but a sturdy handrail.

Serves real ale from four handpumps. On our April 2007 visit the beers available were London Pride, Adnams Explorer, Caledonian XPA (all about £2.90/pint), and Old Speckled Hen. Our April 2008 visit happened to coincide with a beer festival, so we tried one beer named after St George and also O'Hanlon's Yellow Hammer (can't remember what was on the other two pumps). Kake's Yellow Hammer was £2.93/pint and tasted fine but had weird debris in it.

Both our visits have been late afternoon/early evening in April; once on a Saturday and once on a Monday. On both visits, although it wasn't crowded inside, most of the small number of seats were taken.

Note that it closes early on Saturdays, and isn't open at all on Sundays.