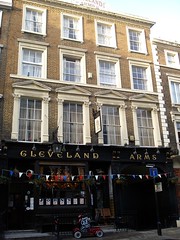 The front part is dark and cosy, with exposed floorboards, a traditional ambience, and a mixture of tall stools and normal chairs and tables. At the back is a carpeted games room with three or four small tables fitted in around a pool table, and a dart board sensibly situated in its own area away from the seats. A shelf of books is available for taking away (minimum 50p donation to charity box per book, as of December 2009).

Kake, bob, Leon, and Dakkar visited on a Thursday afternoon in December 2009. Three real ales were on: Harvey's Sussex Best, Greene King IPA (the regulars), and Everard Sleighbell (the guest, £2.80/pint). Peanuts were set out in little dishes on each table (bob noted that this was also the case on his previous visit a few months back, so it seems to be a regular thing). Music was playing when we arrived, but stopped shortly after (possibly a jukebox). There were about 8 or 9 other customers in, so there were plenty of seats but still a convivial atmosphere.

Food is served lunchtimes and evenings, according to the 2010 Good Beer Guide.

According to a blackboard outside seen in December 2009, quiz night is Tuesdays from 8:30pm.

Accessibility: Two steps up to get in. Toilets are down a flight of stairs with a non-continuous handrail and a bend at the bottom.