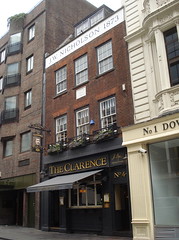 The current Nicholson's chain is a revival of the name into a brand owned by Mitchells & Butlers, and the prominent wording "J. W. Nicholson 1873" on the frontage seems to have been added relatively recently (see Ewan's photo from 2008).

Inside, it's a long narrow room with a low ceiling and not much natural light. Tall low-backed chairs are marshalled along a drinking shelf at the front, and the room leads back past a few chairs and tables facing the bar to a banquette seating area at the back. There's also a separate dining room on the first floor, with its own bar (including three handpumps).

A wide margin of black and white tiling surrounds the bar, with varnished floorboards elsewhere. The mirrored bar back bears a Nicholson's logo, and wine glasses hang from a metal gantry above the bar, along with three-holed paddles for tasting "3 ales of your choice".

Attempts have been made to create a traditional ambience, with a sheaf of barley in a vase on the bar, a beer barrel in a corner, and an old fashioned bell with a rope pull behind the bar for calling time. On a shelf against one wall, an old-style telephone sits rather incongruously beneath the globular stare of a CCTV camera.

There are eight handpumps on the bar, which on our September 2014 visit were offering Sharps Doom Bar, Nicholson's Pale Ale, Truman's Runner, Windsor & Eton Knight of the Garter, Everards Tiger, Thwaites Wainwright, Fuller's London Pride, and Weston's Old Rosie. Drinks available on the keg fonts included Peroni, a couple from Meantime, and Mortimer's Orchard cider. A pint of lime and soda was 60p.

Kake visited on a Sunday morning in September 2014. Arriving at 10:15am, shortly after opening time, I was the only customer throughout my visit. Music was playing (not too loud, and fairly unchallenging selections), and the flatscreen was showing the news with the sound off.

As it was before noon, they were serving their breakfast menu only. I had the vegetarian sausage sandwich (£5) photo, which turned out to be a roll rather than a sandwich, though this worked well. The sausages were based on TVP or similar, and were a little dry. Nothing else was in the bun, but sauces were brought separately on request. The bun held together well.

Accessibility: A step to get in. The toilets and dining room are up a flight of stairs with bends and a non-continuous handrail. The cubicles in the ladies' are a bit of a squeeze.