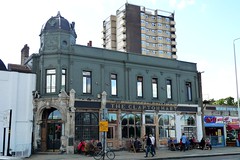 A spacious Antic pub by the Lea Bridge roundabout in Lower Clapton.

This was formerly a pub called the White Hart and part of the old signage remains, though inside it has been stripped back to the bare walls and floors and retains a scrappy, reclaimed feel. Decor and furniture is in keeping with the aesthetic, and is typical to the Antic chain, with its mix of styles and sizes.

The pub is split into four large and roughly equally-sized rooms, each with plenty of tables, and (on Ewan's Sunday afternoon visit in June 2012) each full with patrons. A beer garden is promised at the rear, but was not yet open.

There are eight handpulls at the bar, dispensing East London Brewery Nightwatchman, Redemption Trinity, Quantock Ginger Cockney, Tiny Rebel FUBAR (£1.80/half) and several others. Cider was also available, dispensed from boxes behind the bar, and there were draught beers available as well including Sagres, Amstel, Cotswold Lager and others, as well as a few bottles, but not a huge selection.

Food is served 4pm-9:30pm Monday to Thursday, and noon-9pm on Friday to Sunday.

Music was playing on Ewan's visit, but very quietly; most of the noise came from the chattering of a busy pub (a perfectly reasonable volume).

On Bec's October 2013 visit, the beer garden was open. The menu featured several vegetarian meals - the veggie burger was vegan. A pint of lime and soda with cordial was .50p; free if just soda and lime wedge.

Accessibility: One step to get in, but toilets are on the same level.

Child-friendliness: There were some children playing and roaming round the pub in the early evening however there was no posted policy or curfew regarding children.