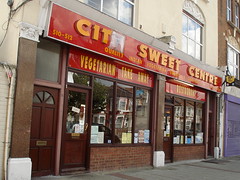 Everything on the menu photo is vegetarian. Sweets are sold by the kilo, and include jalebi, bundi, ladu, barfi, halwa, and shrikhand. Savouries (also by the kilo) include Bombay mix, gathia, and chevda.

Snacks (chaat) are priced per portion, per piece, or per kilo. These include bhel puri, pani puri, dahi wada, samosas, patra, dhokra, spring rolls, and mogo.

In August 2014, Kake visited for some pani puri (£2.50 for five) photo. I was asked if I wanted them for takeaway (I did), so it sounds like there's an option to have them prepared one at a time for immediate eating.

The pani (flavoured water) was very good, nicely tangy and with a good depth of flavour. The filling was plain — boiled chickpeas and cubed boiled potato — but this isn't a bad thing as the star of the show is the pani. The puri (crisp shells) were crisp and fresh but unfortunately not very structurally sound; three of the five had holes in, meaning that the pani leaked out of the bottom, and one of the other two had a large crack, making it impossible to use as intended.

Kake's verdict: I was a little disappointed with the holes in the puri, but I'd give it another chance as I've heard good things about this place from others and I may have just had a bad batch. The pani was definitely worth going back for.

Accessibility: A step to get in. Two seats to use if there's a wait for your order to be prepared, but no eat-in space. No obvious customer toilets.