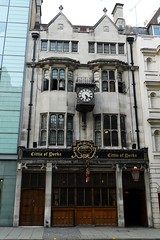 A relatively historic pub on High Holborn. It's on CAMRA's national inventory of historically-interesting pub interiors, which presumably explains its presence in the Good Beer Guide.

There are two rooms at ground level, and a cellar bar downstairs. The back room on the ground floor, where the main bar is, has maybe 8-10 booths each seating four people.

The cellar bar is often booked out, fully or partially, for private parties. It also has somewhat strange acoustics due to its curved ceiling; Kake has been sat on one side and heard someone having a private conversation on the other side as clearly as if they were sitting next to me talking directly into my ear.

Bottled beer, somewhat disconcertingly given the generally cheap prices in Sam Smith's pubs, was £3.50 as of May 2007. All drinks options are standard Sam Smith's (see that page for general comment applying to all Sam Smith's pubs).

As of May 2007, food is served noon-3pm and 5pm-9pm, and main courses are all £7, generally served with chips (fairly good) and salad (reasonably varied). Chicken, ham, and leek pie is a proper pie with pastry all the way around, and quite tasty. Other main courses include sausages with onion gravy, steak and kidney pie, vegetarian quiche of the day, and lasagne.

Rowley Birkin QC and two others visited about 4.30pm on a hot Tuesday in late July 2019. We had the Old Brewery Bitter which personally I thought tasted a little odd, but the others felt it was OK. We sat in one of the booths, and there were only about 15 other people distributed elsewhere in this large pub. It was very quiet, the effects of many sitting in the booths, and also the Sam Smith's policy of no piped music. In fact, it was so quiet we felt slightly uncomfortable and moved on after one pint. I did not examine the toilets, menu or pricing.