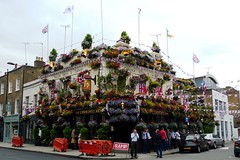 Fuller's pub in Kensington, in the Good Beer Guide.

Beers on handpump are Pride, Discovery, Chiswick and ESB. They also have Fuller's Porter on draught (£3.45/pint), served in its own distinctive glass.

It has a Thai restaurant out the back serving food all day from noon to 10pm (10:30pm Sunday). The food is also available to be served throughout the pub. They might do takeaway. The beer and Thai food have both always been very good. The hot dishes really are very hot; Bob, who is a complete chilli-head, needed three pints of ESB to finish a jungle curry once.

Ewan, Jo, ilmari, Kake, Billy, and Anna visited on a Sunday evening in July 2008. It was a very warm day so there were several people standing outside drinking; there were still very few tables free inside, though we got one due to Ewan arriving early. Staff were very friendly, and one who was clearing glasses offered Ewan a top-up for his tap water (and then brought it over to the table a few minutes later).

Again due to the weather, we were mostly drinking Pimm's, which was a little expensive at around £16 per jug, and rather lacking in the required garnishes (orange, lemon, and lime only). Kake also thought the lemonade used was rather overendowed with artificial sweeteners. The food was good though; Jo and Kake both tried the pad thai, in vegetarian and "mixed" (prawn, chicken, and pork) respectively. They accidentally brought Jo a meaty version to start with, but rectified this very swiftly once informed. Ewan's vegetarian green curry was also excellent.

It can get a little crowded in the evening; go early if you want a seat.

The Churchill Arms was the London regional winner in the Perfect Pub Host category of the 2007 Abbot Ale Perfect Pub awards.

On an October 2018 visit steam effort (£2.45), pride, ESB and Oliver's island were on. The pub was busy but bob found a seat easily enough. All entrances have 1 step with main one having 2. Level from the bar to the gents.