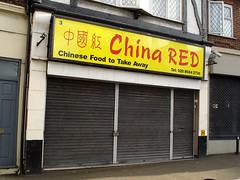 Chinese takeaway in Croydon, located on the roundabout at the junction of Purley Way and Mitcham Road. They also offer delivery, and you can order online via Just-Eat.

It's a fairly standard Chinese takeaway, but in addition to the usual dishes it has a decent range of mock meat items.

Sesame prawn toast (£3.70 in Feb 2012) was fine despite initially looking a little over-cooked. Deep-fried salt and chilli chicken wings (£3.50 in Aug 2011) were actually a mixture of wings and legs, but were tasty enough. Vegetarian grilled dumplings (£3.50 in Feb 2012) were a bit doughy — perhaps due to slight undercooking — and the vegetable filling was undistinguished. The accompanying vinegar dip was also an alarmingly unnatural red colour.

Vegetarian crispy aromatic duck (£6.80 in Feb 2012) was pretty good; made from multiple layers of beancurd skin, it was nicely crispy and flavourful, and worked just as well as actual meaty crispy duck does with the steamed pancakes, julienned cucumber and spring onion, and hoisin sauce. Kake has ordered this twice now and would happily order it again.

Disappointingly, the vegetarian duck with mixed greens (£3.90 in Aug 2011) was not actually as advertised; the "mixed greens" were actually just the usual uninspired Chinese takeaway mix of carrots, baby sweetcorn, mushrooms, Chinese leaf, and water chestnuts.

Kake's verdict: This is probably the most interesting of the many old-school Anglicised Chinese takeaways in Croydon, due to the mock meat options. I still order from here occasionally even though we do now have places that will deliver us proper Chinese food. However, I'd definitely recommend sticking to the mock meat and avoiding all the "real" meat (with the possible exception of the chicken wings).