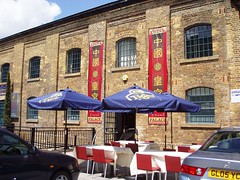 Chinese restaurant next to the [ExCeL Centre]? in the Royal Docks, Docklands.

Ewan, Kake, doop, Bob, and Ruudboy visited for a dim sum lunch on a Saturday in June 2008. We hadn't booked, but there was no problem finding us a table; although there were plenty of other customers the place is quite big.

Dim sum are ordered via a piece of paper with checkboxes; you fill in how many you want of whatever you want, and hand it to the staff. This piece of paper does not have any English on it; you need to match up the numbers on the piece of paper to the numbers on the menu, and this is perhaps why we didn't actually get everything we ordered — the grilled turnip cake and the Japanese-style octopus never arrived, and we got some chicken feet (I think "chicken claws in wine sauce") that we hadn't asked for.

In general, the dim sum photo weren't bad but weren't notably great either. Ewan was keen on the fried dough cheung fun, and Kake quite liked the filling in the grilled chive dumplings; nice, juicy prawns, though the dumplings were perhaps a little over-greasy. Soup dumplings also had a well-flavoured filling, but the wrappers had an overly floury flavour and were tough on the top and soggy enough on the base that they disintegrated on removal from the steamer basket - and so we can't speak for the quantity of soup. The rice that came with the spare ribs in black bean sauce was good. The unasked-for chicken feet dish also had a good flavour; this would possibly have been the stand-out dish were chicken feet not such a faff to eat.

The tea was good — a nice flavour and not over-brewed. Our teapot was refilled promptly as it ran out. Service was fine, and a little more friendly than average (see Category Chinese Food for general discussion of service in Chinese restaurants). Background music was a little too loud for conversation at one point, but I think they turned it down. Ewan described it as "C-pop".

Accessibility: toilets are down one flight of stairs and up another (small) one. There's a lift to get you down the first flight of stairs, but nothing to help with the second.

Kake's verdict (which I think was shared by the rest of the party): would happily come back if in the area anyway, but wouldn't make a special trip.

This place used to be a different Chinese restaurant, called Superstar - see the Dos Hermanos review.

Getting here: Exit Custom House Station via any of the walkways signposted for the ExCeL Centre; they all funnel into one raised walkway at the top. Follow this walkway along (you'll pass the Fox pub on your right). Just before you get to the end and the ExCeL Centre itself, look down to your right and at street level you'll see a row of buildings; the China Palace is in the middle of this row. Continue onwards and bear right to find the steps to street level.